Spain must be the only place in the world where you can go down to the coast and still climb 900 meters to get there! Someone told us it was down to Valencia?

Finally we are starting to make some progress on this bicycle trip and I’m starting to feel like we have really earned those rest days. The problem is now that one day of rest feels like quite enough. So by the end of the day we are ready to be pedaling on. 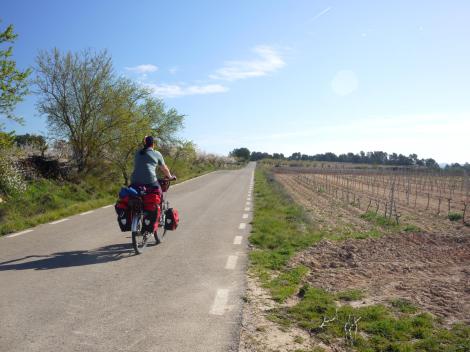 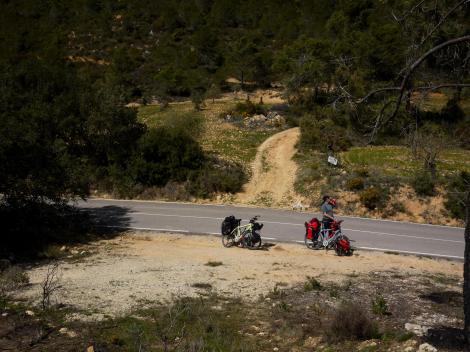 Not much eventful has happened in the last week to report, (Which is a good thing!) everything is starting to look rosey again. (The sun is out, birds are singing that sort of thing.) Brian feels that Quesada was our turning point in Spain. Now after all the trouble we had things are going good. The legs are strong from climbing all those mountains, the rain has pretty much stopped, we have been able to camp more, and we are starting to cover some real distance. And now that we have reached the coast where it is much more flat, (or so they say?) we should be able to continue forward at a good pace. Traffic will be our only problem now. So we shall see if the preference is for the coast or we head back into the mountains? Brian figures that in another 10 days (give or take) we could be heading into France. Exciting for the both of us, we are looking forward to something new.

As of now we are in Valencia taking one of those well deserved rest days and exploring the city with our Warmshowers hosts. (Both are actually cycle tourists) In Valencia the Turia river which once used to run down the middle of the city was diverted back in the 1950’s after a disastrous flood. It has been converted into an enormous park and bicycle path that stretches for around 9 km. So of course we used that bike trail to our advantage for most of the day and then there are also other bicycle paths that run all over the city. Just about every major road has a path that shadows it. This makes it very easy to get around, but sometimes they can be a bit confusing to navigate. I’m sure if you live here it is very simple to use a bicycle to get from one end of the city to the other,  but for me,

I am glad we had a guide to help us out.

Valencia reminds me a lot of Minneapolis, a moderate size city, with bicycle friendly people, nice green space, easy access to the countryside, they have the sea, and at home we have the lakes. A city you can actually live in. Only Valencia has a much greater Spanish feel then Minneapolis, but that is to be expected. Oh and paella! Mmm paella…