Today we are getting ready for the  big climb up the Alps. Making sure we are both well rested, fed, and doing some last minute route planning. Brian is trying to figure out what roads we should take so that can exit France in the least painful way possible. Now that we are preparing our exit strategy, I’ll share a few things I have learned along the way.

First, French food is fantastic especially the Camembert, here  the cheese is much smellier then the stuff we get at home (almost all raw milk, something that isn’t allowed at home*) and it will make your pannier smell like rotten garbage, but it is worth it if you are the kind of person who enjoys heavenly cheese  snacks while on the road.

Second, there are almost no small roads in France! That’s not to say that there aren’t any just that we didn’t find many. When we did happen to come upon a little country path, we enjoyed the hell out of it knowing it was not going to last for long. It’s not that there aren’t “small” roads, there are “small” in the sense that they are not very wide. But what I was told to expect were calm routes where you could ride alone in a picturesque landscape. We found out that isn’t exactly the case. 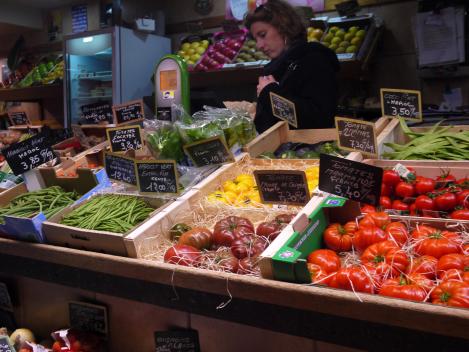 That brings me to number three, French drivers for the most part all think that they are in a Rally car race at all times and drive as such. They go too fast and too close for comfort even when they have plenty of room to pass. They do so at break neck speeds and whiz by so close you could feel the ripples in the paint job. I can count the number of times I’ve been able to take off my helmet and ride unencumbered on one hand! And again this isn’t to say that all of the drivers here are like this but there have been some close calls from very impatient people.

Fourth, Bike lanes are everywhere but quickly disappear when they are needed the most! Brian and I joke that as soon as you see a bike lane sign on the road things are about to get much worse for the cyclist. A very typical thing that happens is that a bike lane/ shoulder will vanish the second you go up hill or cross a bridge. The better one is, if you get to cross a bridge safely in a bike lane with a concrete barrier separating bikes from cars that same barrier will dead end and you and the bike will have to climb over it to get out. So yes there are bike lanes everywhere, I just wonder who they got to design them?

Bringing me to my last lesson learned when you are tired weary and stressed out from a day of road riding with French drivers and want a hot shower in town, just remember that Hotel De Ville isn’t a hotel at all. It’s a town hall! (or some sort of governmental building)

As it turns out riding through France isn’t at all what I thought it was going to be, maybe because it was so hyped up by everyone we met telling us how much we would enjoy the ride? Or maybe it was because I was so ready to be moving on and experiencing another country? We could have also just been spoiled by the lone riding in Spain?

The physical part of riding in France isn’t the hard part. It’s the emotional ride that I find the worst. There have been some demoralizing days, wind gusts kept us from riding  the more out of the way paths and canal roads, completely flat agricultural land can give you distance but can mess with your mind.  But mostly it’s been the drivers.

There have been ups too we got our first 115km day in here in France, the camping facilities are cheap and pretty fantastic, I got my first taste of French “pigs in a blanket”, we got to ride through the lavender fields before they bloomed, I found out that the French people are really very nice (that was a big surprise, since I was always told they don’t like Americans) and lastly they have these great open air markets. We have stopped and bought something delicious at every  farmers market we have come a crossed.

I do have to admit also that the French really have their stuff together when it comes to food. There have been no doggie bags or leftovers from any meal we have eaten. Not like that would happen anyway with a cycle tourists appetite,but just there hasn’t been any bad food! None!

We are about to leave France behind in the next few days and I hope to leave this place on not only a physical high note (ha the Alps) but and emotional one as well. I don’t care what the grade of the mountains will be as long as we can climb them safely and in relative peace. That to me makes all the difference when on my bicycle.

(*You can purchase raw milk cheese at home as long as it has been aged for no less then 90 days or from your local farmers market where it might be labeled as “Fish Food” and not sold for human consumption. So no, you can’t buy raw milk cheese in the USA.)