Awhile back Brian had tried to convince a friend of ours to come and visit us when we finally cycled our way into Georgia. Our friend really wanted to visit us in Istanbul but the timing wasn’t right for either of us. There was a bit of figuring dates out but finally our schedules happened to coincide with our ride into Georgia. Although he didn’t want to visit asking Brian “What is there worth seeing in Georgia?” At the time neither of us had a sufficient enough answer to make that friend buy plane tickets. After spending the better part of a week here cycling on our way to Tbilisi, I finally have the answer to that question. 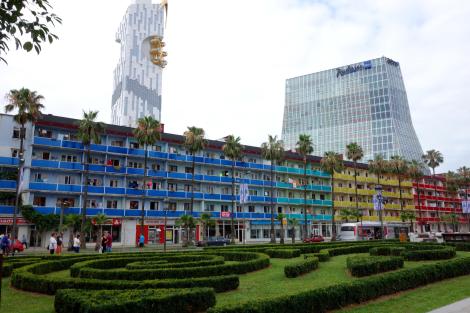 Beginning in Batumi, it’s a nice semi-tropical beach resort town with a very Las Vegas feel. Included are Casinos, amusement park rides, and the main Boulevard is lite up at night with colorful lights. The entire area is on an upward forward boom. Buildings are going sky high and so is the real estate value. There are just enough touristy things to do in Batumi, if you are so inclined. You can if you want sit and take a nap by the beach, maybe take in the sights of the local Art Museum(Day off Monday), see the Botanical Gardens, or do what we did… a whole lot of nothing. Brian and I aren’t really beach goers (even less the pebbled type beaches) and the more we travel the worse sightseers we become. The main attraction for us along with several others, was the ease and availability of Azerbaijani Visas. This small town in Georgia off the coast of the Black Sea has a reputation for being able to obtain these visas with minimal effort. Brian, I, and three others can verify this rumor as correct. The entire process took us no longer then a few hours with only a some pages of paperwork to fill out (in duplicate), photo copies to be made, and some money to be paid (in GEL). The most unfortunate part was the amount of money we had to fork over in order to obtain these stickers $285 GEL or approximately $175 USD (each), these would be the most expensive visas for the entire trip! In reality doing the visa approval here saved us a ton of money in the long run verses getting them elsewhere. Though it still hurts to hand over that amount of cash all at once and to top it off the visa sticker isn’t striking at all. Once the entrance approvals where in our passports it was time to leave this sea side attraction and move on towards the mountains.

It took us 2 days/155kms to climb to the peak of the Goderdzi Pass, at the height of just under 2100 meters. Since we where on a time budget in order to meet with a Couchsurfer in Akhaltsikhe we had to hitch a ride for the last 10 kms up the mountain pass. On the bicycles we were crawling up the mountain at the speed of 5 km per hour and were never going to make it in within our time  frame if we hadn’t hitched a ride on two separate flatbed trucks.  They were climbing up the pass only slightly faster then ourselves. If we weren’t on a schedule to meet up with our host I would have liked to do that ride in a more confortable three day time frame. Two days really isn’t enough time to take in all the spectacular views. Also, it is incredibly easy to find food, clean water and wild camping spots all along the route and yet still be virtually alone. As we are getting further East, the lack of people and the openness of the surrounding lands is becoming much more enjoyable. Besides hitching that one ride, Brian and I had a fantastic time working our way up the mountain and we had a few little adventures along the way as well. 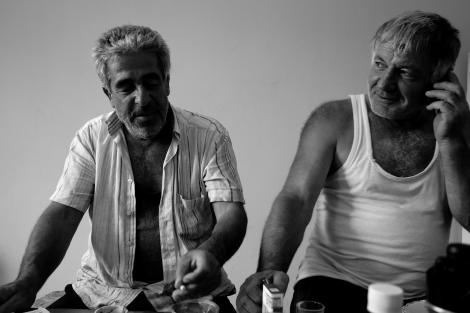 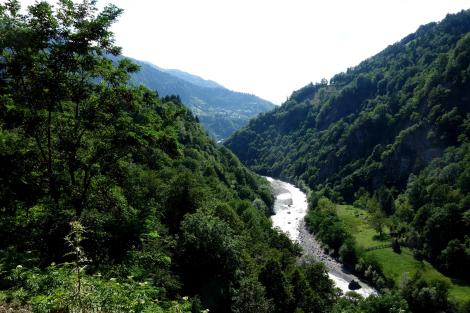 All along the road to Georgia we had heard and read some pretty negative reviews of the country and it’s people. This wasn’t just coming from it’s neighbors the Turks (neighbors never do seem to agree with each other)  but from other travelers as well. I’m thrilled to tell anyone who asks that so far this hasn’t;t been our experience at all.

Summer has hit with a vengeance here in Central Asia and things are going to get much  worse before they get better. Again we have taken to resting under the shade of some trees (while there still are some)  at mid-day when the sun is at it’s highest and therefore it’s worst. Halfway up a steep hill around 2 pm  our first day out from Batumi, Brian and I decided to quit the suffering and head for what looked like an empty construction site so that we might relax under the partially built structure. I don’t believe we even took two steps inside the compound before two men appeared and beckoned us to come inside. Being on the road as much as we have  been lately there was no hesitation in our response, people everywhere just want to help. We quickly followed them inside and out of the rising heat. Almost immediately they sat us down and began to feed us some sort of cheese, mayo, and bread concoction. Which was lovely of them but after being out in the hot sun for most of the day, the sight of such things made our stomachs turn. Brian managed to garble together some Russian words that stated he was basically lactose intolerant and they instead offered up some fresh veggies which was more to our liking. On offer was also some Homemade Chacha (Brandy), which being on bicycles we both refused. I managed to get out of this predicament with out to much of a fuss.  (Sometimes the double standard works in a woman’s favor) But as Brian was the man he didn’t get away that easily, there was a bit of convincing before an agreement was made. Brian would have a small drink with the two construction workers (which they turned out to be the foremen on this site) but only a pinkies width worth. After which everyone was placated and then instead of more alcohol, coffee was served. They later on insisted we take showers in the somewhat functional bathroom and then go for a rest in one of the rooms that had a few beds and TV in it. Around 5 pm when the weather was beginning to get nice again we went to say goodbye to out new found friends and wound up getting a tour of the building that they were putting together. They were constructing a water bottling factory with as an added bonus, a little personal spot for wine making. They sent us on our way with a liter of bottled water and a cup of homemade wine. Our first real encounter with Georgians being a truly enjoyable experience. 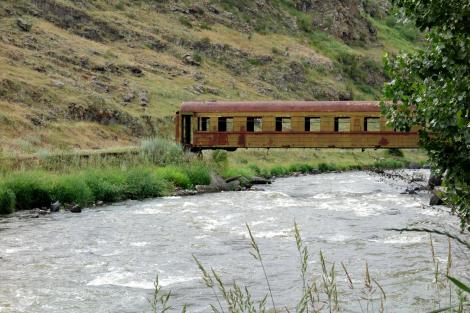 Everyday in Georgia has been a wonderful for cycling, it is still quite a changeling ride the route we chose was through the mountains instead of the easier plains. There has been some steep hard climbs but the scenery is worth the pain. Georgia’s landscape changes daily of not hourly when you ride your bicycle through it. If you really wanted to you could see just about any climate you could imagine. We began with the semi-tropical region by the Black Sea, into the steep gravel path of the Lesser Caucasus Mountains, then Semi-Arid scrub vegetation and lack of trees, the Highland areas with large hills with pine forests even some fruit trees as well , and eventually down to the river valley that is Tbilisi. So far there has never been a boring ride in Georgia the landscape changes so quickly. If you find yourself tiring of one place or you don’t like a certain climate then just wait until tomorrow and it will all be new and different. As a cyclist there isn’t more you could want or need? 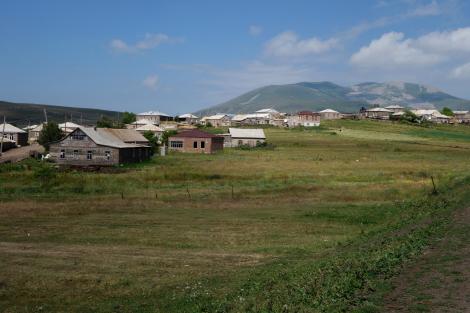 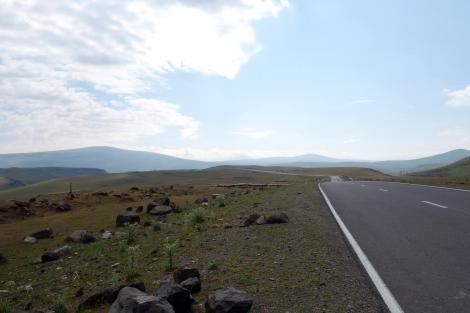 I feel that we can now answer our friends question about what there is to do in Georgia, if you are an outdoors sort of person or enjoy nature you can do just about anything you can imagine. 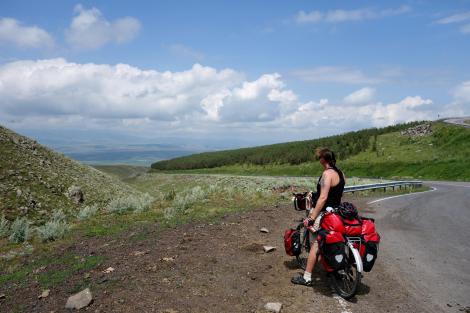 About to head down again. 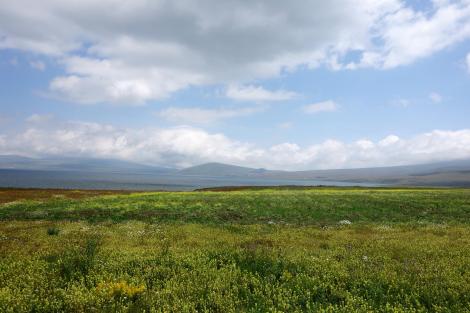 2 responses to “The Ever Changing Landscapes of Georgia”