So far this fall for the first time in a very long time things have not been dominated with the talk and acts of bicycles. This strange circumstance was mostly brought on by Brian, who has decided to sideline his  focus on racing this year in pursuit of other hobbies most but not all have nothing to do with actually riding.That’s not to say that he and I aren’t preparing for the future  racing/touring season. Just that with over 6000 base miles for this year, it’s time for a short break from the saddle.

Time these days is now divided between work, working out, and social obligations. The later of which really starts to pile up after 6 1/2 months on the road. After being back for four months has our world has begun to stabilize, for better or for worse.  Going back to work has been a struggle for me, finding a job was the toughest part but now I’m back into the daily grind. It’s a love hate sort of thing. For the first time in our careers Brian and I are working on the same project. Although we never physically see each other, this project massive and that we work in the opposite spectrums of the construction industry. So although we are at the same place at the same time there is virtually no contact between us besides the occasional text messages at break time. After the workday is through, we both have come into the routine of going to the gym several times a week. He focuses on weights and squats, readying himself for the Track and I do a little bit of cardio and weights as well. I’m just hoping to keep my legs strong for future touring, but with out riding all the time with a loaded bicycle, it’s hard to keep up that sort of fitness. The weather has turned here in Minnesota, snow covers everything and lately the temperature has turned into the sub zero’s wind chill. Not exactly conducive for cycling, although I see people doing just that all the time in Minneapolis. I just figure they are either braver or not a susceptible to cold temperatures as I am. Either way, I’m sticking to mostly indoor work outs for the time being.  With one or two exclusions, Mountain Biking or Cross County Skiing. 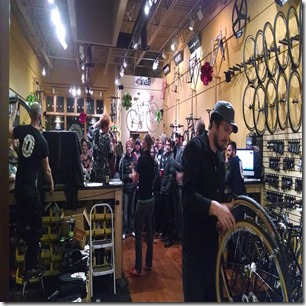 Living in a winter wonderland such as this, we had decided a few years ago the we were going to have to learn and like the snow and to a lesser extent the cold if we wanted to continue to happily live here. Everything else in the upper Midwest is so perfect for us, (I do miss the mountains) except for the winters which can last a normal several months or get into the dismal and upwards of six. Finally this year we were able to purchase for the first time ever for either of us, Cross County Skis. Neither of us know what we are doing on the skis but lack of education on such matters has never hindered us before. As of right now we have been out only twice with both disastrous results. No one has been seriously hurt, unless you include pride being on the list of bones that one might break?  Lessons are definitely in order and we start a group session on Sunday.

Something that needs less formal instruction but more practice is Mountain Biking. It’s something the two of us have been talking about picking up for awhile now. And since we had the funds in the budget because of our early homecoming, it was an easy decision. Again with this practice we have only been able to get out twice before conditions became to severe for bikes on the single track that is close to our house. Some friends of ours have told us that the trails here are good for fat bikes but possibly not for mountain bikes? We will have to brave the weather soon and go try again. I am very excited for the chance to ride year round and travel a little to the more mountainous regions of the US with these bikes in tow.

Another interest that has taken this household by storm has been Brian’s recent obsession with Bourbons. After more then ten years of sobriety he has decided to indulge a bit in some of America’s finest whiskeys. This new hobby has lead us on searches for hard to find and rare bottles, sometimes traveling within an hours drive from the cities.  More often then not coming up with a few rather expensive vials of various intoxicants. I myself have found that my appetite for these such sprits is much greater then the actual need, knowing this I’ve decided to abstain from hard alcohol all together. Brian seems to enjoy this hobby with much more responsibility then in his younger years. I assume his

palate has refined quite a bit since then.

Things here are really starting to relax back into the norm, which isn’t necessarily good or bad. Maybe it’s for the best seeing that winter is in it’s way and it been decided that for the first time in years that we will not be snow birding it some where else this year. But instead staying close to home and trying to soak the itchy feet in lieu for scratching. This might work?

4 responses to “Skis, and Mountain Bikes, and Bourbon, oh my!”